Standardized rules and organization of 9-pin were developed by the American Bowling Congress in 1895. Ninepins was the most popular form of bowling in much of the United States from colonial times until the early ninteenth century, when it was outlawed in many areas and replaced by tenpins. Today, ninepins has disappeared from all of the United States except in Texas, where both nine and ten pin bowling have been known since the 1830s. Ninepin alleys were numerous enough by 1837 to be subjected to an annual tax of $150 by the First Congress of the Republic of Texas and all forms of bowling have remained legal and subject to taxation in Texas ever since. Whereas tenpin alleys were usually found in saloons and other establishments frequented by men, ninepin alleys were often built by clubs patronized by families.

By World War 1 most Texas bowling establishments, both private and commercial, had changed to tenpins. However, ninepins remained popular in predominately German communities like Fredericksburg, New Braunfels and Bulverde, until the introduction of fully automated pin-setting machinery in the 1950s caused most of them to make changes as well. Those bowlers who still preferred the teamwork and camaraderie of ninepins then moved to the ninepin clubs in small outlying communities of Bexar, Comal, and Guadelupe counties. 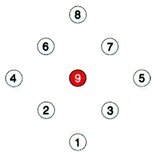 The pins are lined up in a diamond shape. The center or #9 pin is red in color and has a significant meaning in scoring. The pins are further apart than in 10-pin. Both 9-pins and 10-pins are the same width, but in 9-pin the length is slightly longer. The 9-pin rack lends itself to more splits than in 10-pin, which like 10-pin are not good for scoring purposes, as a fact they are more costly.
Because there are no machines that set the pins automatically, like in 10-pin, 9-pin uses pin-setters to set up the pins and return the balls.
Team Make Up and Game Format

In 9-pin there are 6 bowlers and the game is 6 frames unlike in 10-pin which has 10 frames. The line-up is not fixed in 9-pin as it is in 10-pin. The team captain or "caller" calls up the rotation on a frame for frame basis and chooses which bowler starts and which bowler follows in the rotation. A team will bowl the first three frames one lane then switch with the other team to the other lane to bowl the remaining three frames. For example if Team A is bowling against Team B on lanes 1 & 2, Team A will bowl the first three frames on lane 1 while Team B is bowling their three frames on lane 2. The teams switch for the last three frames. Each bowler is given two balls to roll no matter what he/she scores on the first ball. A score of "9" is awarded for a "RINGER" known as a strike in 10-pin, unless the RED (9) PIN is left by itself, then the score is "12" also known as a "RINGER 12". That means a bowler may score a possible 24 points per frame (very difficult). If however the bowler does not "ringer" on the first ball he/she then uses the second ball to spare (score 9 or 12). If the bowler does not score (clear the pins or leave the RED 9 pin) then no score is awarded and the Captain/Caller calls on another bowler to finish the task by shooting at the remaining pins.
No score is awarded the team until the pins are all down or the RED pin is left no matter how many bowlers it takes. The exception is on the last ball of the last bowler then however many pins are down is the score given. Each bowler bowls once per frame and then the score for that frame is added. The score is the team score there are no individual scores. The frames are added together to get the team score. All three games are added together to get a series score. All games are head to head against your opponent. In league bowling there are three games bowled against your opponent.

Parts of this page have been adapted and edited from BulverdeBowlingClub.com